Chinese chip company Xichanweixin (锡产微芯) based in Wuxi of eastern China’s Jiangsu Province led an acquisition of the world's second-largest RF power company Ampleon for over $1.48 billion, according to information on Henan Asset Management’s website. This is the largest semiconductor M&A transaction in China so far this year.

In May this year there were press reports that a joint RMB5 billion ($0.74 billion) fund was being raised intended for this acquisition and the listed company Taiji Industry also in Wuxi is the other major party in the deal.

After the acquisition, Xichanweixin will become the world's second-largest supplier of RF components for mobile base stations, helping the company benefit from the global 5G construction wave and the trend of using more domestic semiconductor substitutes. 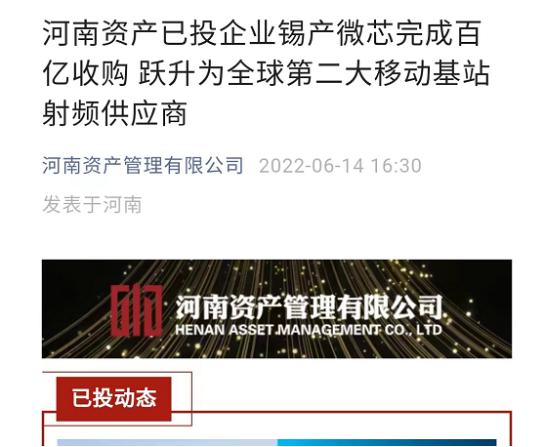 Founded in 2019, Xichanweixin also owns LFoundry an 8-inch production line in Italy, after SMIC sold to it for $113 million in 2019.

LFoundry is a professional foundry headquartered in Avezzano, Italy. It mainly produces advanced analog manufacturing services, with a monthly output of more than 40,000 wafers. The factory has 200mm production lines and 150nm and 110nm processes.